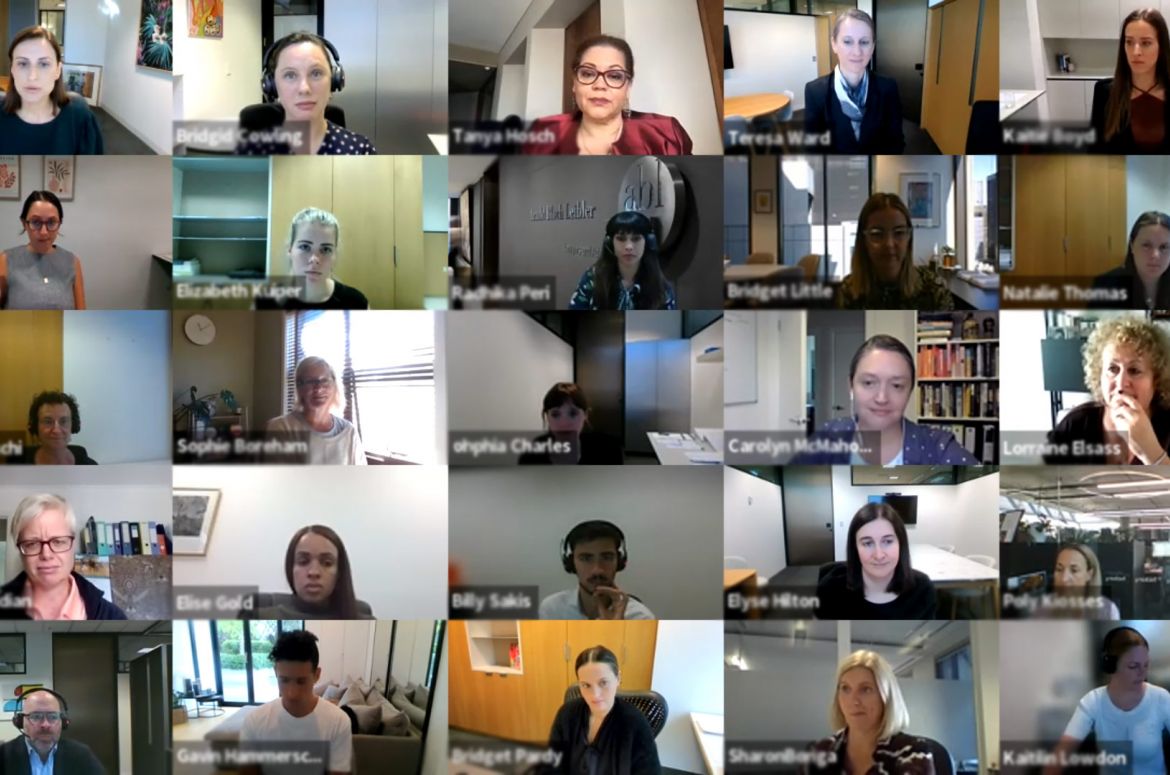 Each year, Arnold Bloch Leibler hosts an event to mark International Women’s Day with a special guest speaking in conversation with one of the firm’s senior women. The event is hosted by partners Teresa Ward and Genevieve Sexton, and special counsel Bridgid Cowling.

This year, our virtual audience of 135 clients, colleagues and friends of ABL had the privilege of hearing from Tanya Hosch, Executive General Manager - Inclusion and Social Policy at the Australian Football League, in conversation with property partner Gia Cari.

Tanya is the first ever Indigenous person (and second ever woman) to reach the executive ranks of the AFL, She spoke candidly to Gia about a range of issues, including, women in football, achieving work/life balance and the doubly whammy of racism and sexism, Tanya Hosch opened up about the highs and lows of leadership. Reflecting on the rich content of the conversation, Teresa, Genevieve, Bridgid and Gia identified their top take-out messages from Tanya.

Teresa: Tanya’s message of the importance of inclusion and representation in decision making, for women and Indigenous women in particular, resonated strongly.  You can neither be what you cannot see nor think outside established norms if there is not diversity in the conversation around a Board table (or generally) and that is so important in all areas of life.  Tanja’s comment about the future of AFLW also reminded me that the future is malleable, and while we should draw from aspects of the past that meet the future needs of a group, we can also craft a ‘different’ normal that tackles entrenched imbalances and capitalises on strengths and opportunities.  Finally, Tanya’s honesty about struggling with her place in the AFL, and achieving balance more generally, shows that being a leader may not be easy but that bringing your whole self to the role is a critical part of what it means to lead with passion and show people what possibility looks like.

Genevieve: Tanya observed that best practice for women isn’t necessarily emulating how men do it.  I loved that as a concept.  But I’m also challenged by it.  Whilst it is incredibly important that outcomes be equitable (rather than exactly the same), as soon as a solution for women is different to the status quo for men, it raises the question of whether it is better-different or whether labelling at as a ‘deliberate difference’ is just an excuse.  It makes the judgement of the effectiveness of solutions much more nuanced and complex.

Bridgid: Tanya reminded us that women’s inequality does not exist as a single experience, but that there are intersections of race and class to be addressed as well. She spoke about the trauma of racism and how it accumulates so that a relatively minor expression of racism can be the one to “undo” her.

I was also struck by how Tanya demonstrates in her life and her work the power of publicly recognising and highlighting the work of women who inspire her. When the structural change that we need to make can seem overwhelming those small acts of change are powerful.

Gia: Tanya spoke of the "intersectionality" of her experience of racism and sexism, and the toll it's taken on her mental health at times. The last couple of years have put us all under significant pressure in one way or another and, by being so candid, Tanya opened up a safe space for people to talk about their own struggles.

I also loved Tanya's unexpected response to the question about whether she thought the AFL would ever have a female CEO. She told us that when she was interviewed for her position by AFL CEO Gill McLachlan and he asked her about her professional aspirations, she quipped that her plan was to have his job! Even in jest, very few women would have the courage to do that but, again, by speaking the words, Tanya opened up the possibility ... .

To view a recording of the 2022 Arnold Bloch Leibler IWD event, In Conversation with Tanya Hosch, click below.