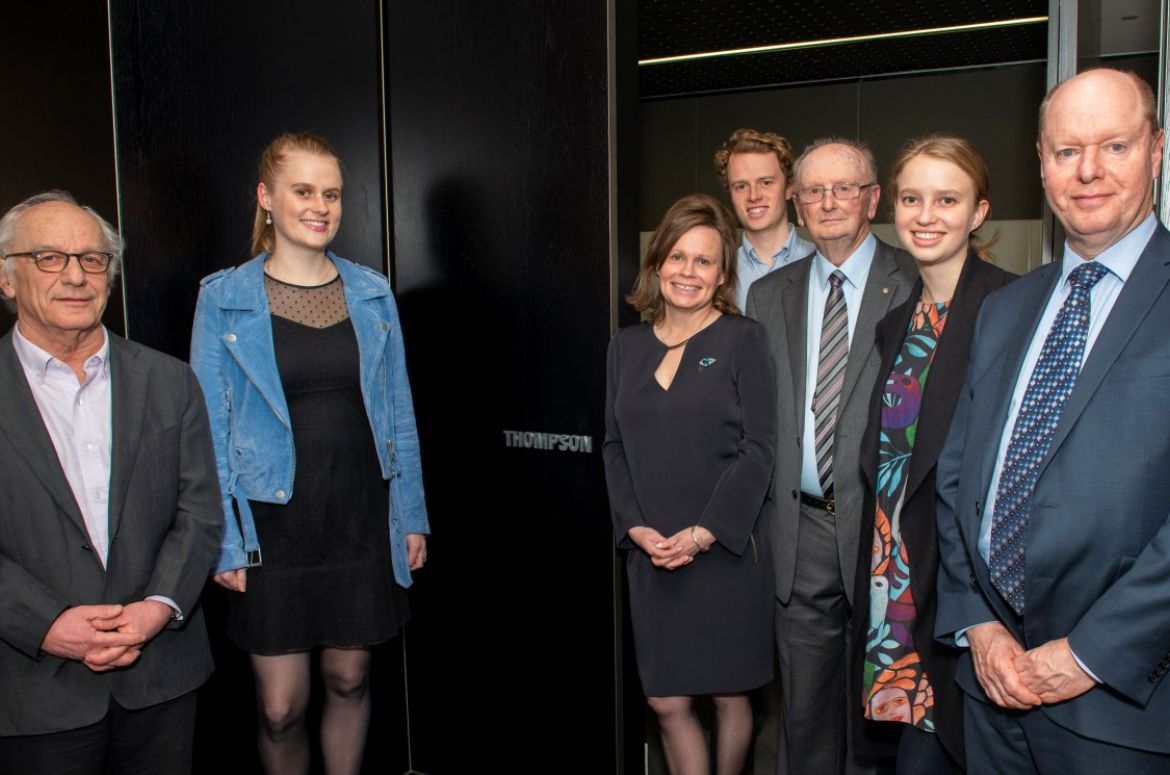 Partners gathered last week with family and friends of the late Leonie Thompson to dedicate one of the firm’s boardrooms in her name.

“When the partners were planning the launch of what was then a new corridor of conference rooms here at Arnold Bloch Leibler six years ago, we saw the naming of these rooms as an important opportunity to pay tribute to people who had shaped the firm’s culture and values - people who viewed the law, as we do, as an instrument of social justice.

“We wanted the lawyers who use the spaces to feel their presence, and be inspired and guided by it every day.

The partners took no time to identify the first three names: Arnold Bloch, Sir Zelman Cowan and Ron Castan. They were equally clear that the fourth room should be named after Alan Goldberg, whose family attended the dedication of the Goldberg Room in May of this year.

By that time, explained Mark, the partners had already agreed, “unanimously and by acclamation”  that the remaining unnamed conference room would be dedicated, in perpetuity, in the name of one of the Arnold Bloch Leibler's longest serving partners, Leonie Thompson, who died last December.

“Not only did Leonie have formidable skills in black letter law. She also had exceptional judgement, and a singular emotional intelligence that allowed her to relate, with ease, to all manner of clients and colleagues,” said Mark.

“Leonie played a pivotal role in transforming the litigation department from where it began, as a support service to the firm’s commercial practice, into the powerhouse it is today.  She was also heavily involved in the development of Arnold Bloch Leibler’s unparalleled public interest practice.

Mark said that Leonie was appointed partner at Arnold Bloch Leibler 20 years ago, at a time when the senior ranks of this firm, and the legal profession more broadly, were heavily dominated by men.

“As [Arnold Bloch Leibler Partner] Leon said at the wonderful memorial ceremony for Leonie that was held here last December, rather than being frustrated or embittered by the challenges she faced, Leonie became determined to change things for the better.

“For herself, but even more so for the women who would follow in her footsteps. I know that the women in the room tonight feel a huge debt of gratitude to Leonie. They see her, and speak of her often, as a role model, a mentor, an inspiration.”

Also speaking at last week’s dedication event, litigation partner Caroline Goulden explained that, before Leonie died, she expressed a wish that her former office should always be occupied by a female litigation partner.

“This particular wish is Leonie’s uniquely perceptive way of extending her formidable influence over ABL, to ensure that her considerable efforts to support ABL’s female lawyers, are carried on by women, for women, working in Leonie's space,” said Caroline.

“I am extremely honoured to now be using Leonie’s office, as my office”.

Replicating a time-honoured tradition of the bar, where the names of barristers who have occupied chambers are placed on the rear of the door, Leonie Thompson’s name has recently been placed on the back of Caroline’s office door.

As Caroline said at the dedication event: “It’s a simple gesture, but one we hope captures the respect we all have for Leonie and her legacy.”

To view the full gallery of photos from the event, click here.