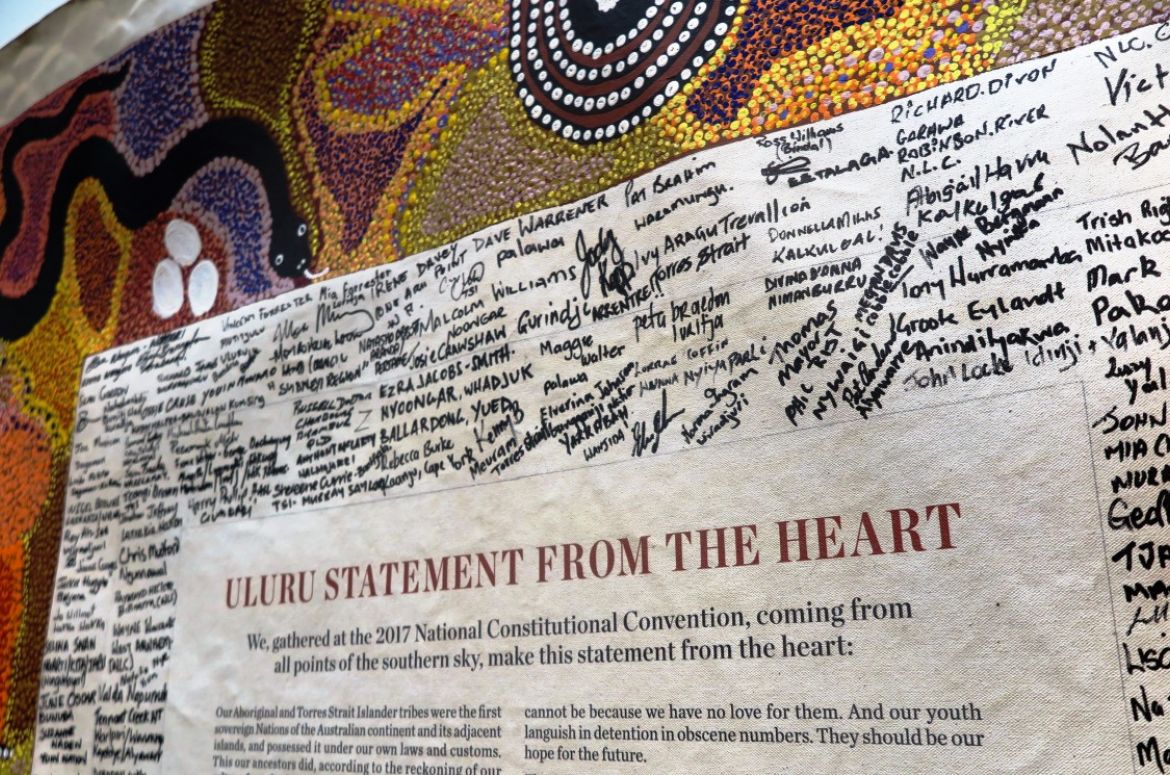 Senior Associate Bridgid Cowling and Law Graduate Joshua Quinn-Watson reflect on a Melbourne Law School-hosted panel discussion on the historic constitutional moment created by the Uluru Statement from the Heart.

Thomas Mayor: The challenge now is to ensure that the Uluru Statement does not “sit on a wall gathering dust”

Thomas Mayor provided a remarkable first-hand account of the process leading to the Uluru Statement, and the work of building agreement through twelve regional dialogues culminating in delicate negotiations at the Uluru Convention in May 2017.  He described the moment at which the Uluru Statement was read to the Convention delegates and endorsed by acclamation as a “profound moment of hope”. Thomas Mayor considered one of the great achievements of the Uluru Statement is that it represents the consensus position of Australia’s First Peoples: it is a truly national document, and represents more than the thinking of groupings of high-profile or regional leaders. The challenge now, he stated, is to ensure that the Uluru Statement does not “sit on a wall gathering dust”. It must be acted on, and its three recommendations – for voice, treaty and truth-telling – given effect. Despite obvious political obstacles, Thomas Mayor  considered that a groundswell of support from the Australian people would make that possible. He stated that he has seen positive signs of such support as he has travelled throughout the country with the Uluru Statement in recent months.

Cheryl Saunders: The Uluru process offers a "model of grassroots dialogue and consensus-building"

Cheryl Saunders described the Uluru Statement as a “constitutional moment … a point in time at which people rise above their day-to-day preoccupations with a sense of collective purpose, to reach a sufficient consensus”. The movement to a post-apartheid constitution in South Africa is a recent example of such a moment. Such moments, she stated, are rare and must be seized since they “make the impossible at least conceivable and… provide a foundation on which a better future may be built.” Cheryl Saunders paid tribute to both the Uluru outcome, which “tells us what genuine recognition involves”, and also the Uluru process, which offers a model of grassroots dialogue and consensus-building which may be a model for other constitutional processes in Australia. The challenge now, she stated is to ensure that Australia agrees with the Uluru Statement, not only in “technical terms” by taking steps necessary to change the Constitution, but also “in spirit, by embracing the opportunities that Uluru offers… [and] extending the constitutional moment.”

Adrienne Stone considered the Uluru Statement from the perspective of Australian constitutional law. According to Adrienne Stone the Uluru Statement offers Australia an opportunity to, for perhaps the first time, come to a political settlement with its First Nations. She considered that the Uluru Statement is consistent with core aspects of Australia’s constitutional history and culture, namely an Australian preference that change, including symbolic change, be pursued through substantive, procedural reforms, rather than explicit statements of value. The Uluru Statement is consistent with that preference since it proposes something “practical, procedural, and provided it is embraced by Indigenous peoples and the broader community, potentially powerful”. Finally, she noted that one of the key practical benefits of the proposed voice is that, since it is a procedural reform, it is flexible, and can account for changing First Nations aspirations and sentiments over time.

Jill Gallagher: Victorian treaty process must be pursued in parallel with action on the Uluru Statement

Jill Gallagher shared insights on the ongoing Victorian treaty process and her role as the Victorian Treaty Advancement Commissioner. One of the key aspects of that role will be the development and nomination of a Victorian Aboriginal representative body to negotiate with the State Government the parameters for treaty making and the creation of a treaty authority to oversee and assist the Victorian treaty process. Jill Gallagher emphasised that her role is not to negotiate treaties, and nor will that be the role of the Aboriginal representative body. Treaty making can and will take many forms.  Who will negotiate them and what they will say will be up to the Aboriginal peoples of Victoria. Jill Gallagher expressed the great optimism we should all feel for the Victorian treaty process.  A process that compliments, and must be pursued in parallel with, action on the Uluru Statement.

Kirsty Gover put the Uluru Statement recommendations in international perspective. She noted that all settler countries have found ways of ensuring that First Nations are heard in their political affairs. In comparative terms, she considered the Uluru Statement’s recommendations relatively modest. Kirsty described comparable representative structures in Canada, and New Zealand. She noted that New Zealand provides not only for a consultative body, the Maori Council, but also makes provision for Maori reserved seats in Parliament, and in addition, has elected a number of Maori to non-reserved seats.

Demonstrating support for the Uluru Statement

Finally, the panel emphasised that the current political obstacles were “not an impasse, but a cross-roads”. Questions from the audience were directed to how the public could demonstrate their support for the Uluru Statement from the Heart and an eventual referendum.  Some of the suggestions included:
As our Senior Partner, Mark Leibler AC tells us, it is clear that the issue of constitutional recognition is far from over!