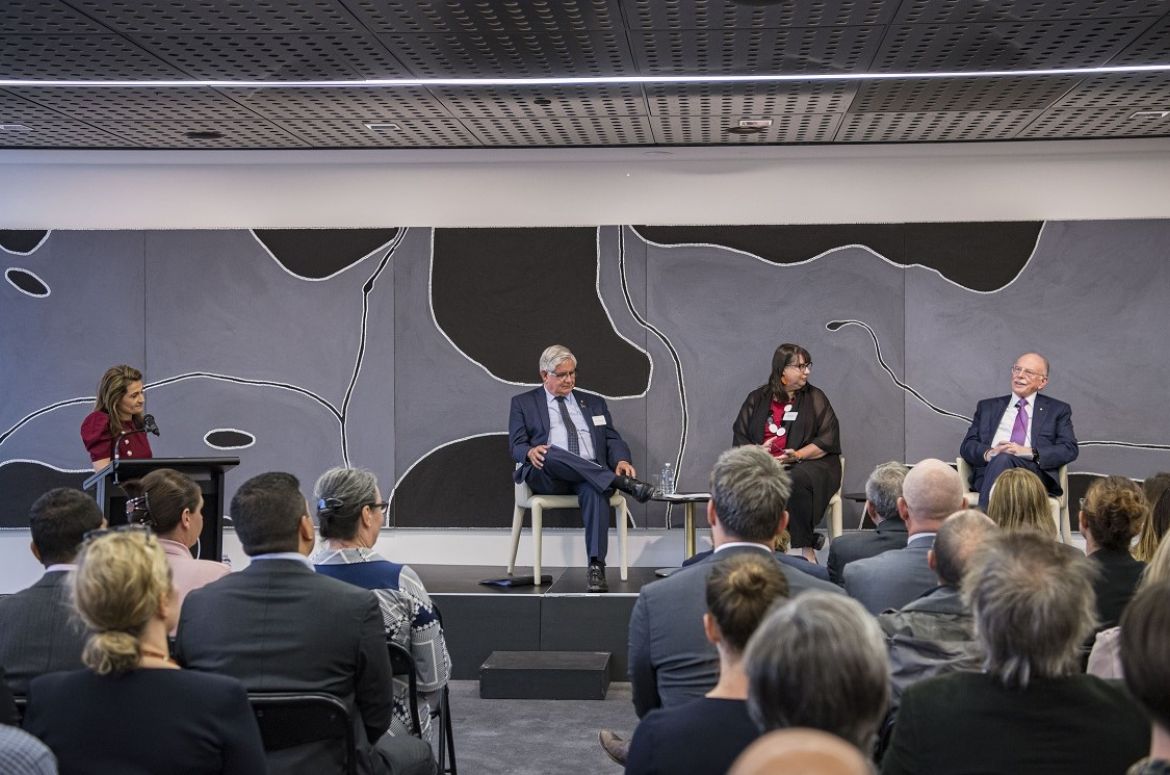 On the eve of the first meeting of his newly appointed senior advisory panel, co-chaired by Marcia Langton and Tom Calma, the Minister for Indigenous Australians, Ken Wyatt, visited Arnold Bloch Leibler in Melbourne yesterday to take part in a panel discussion on constitutional recognition of Aboriginal and Torres Strait Islander Australians.

The event was hosted by senior partner Mark Leibler and public interest partner Peter Seidel, with Mark joining the Minister and constitutional lawyer Melissa Castan for a discussion on separate co-design processes being undertaken into constitutional recognition and the establishment of an Indigenous advisory Voice to Parliament. The discussion was moderated by RN Drive presenter Patricia Karvelas.

In opening the event, Peter included in his Acknowledgement of Country an acknowledgement of the “great many Traditional Owners who have suffered at the hands of those who have sought to silence their voices – Traditional Owners who continue to show remarkable patience & generosity of spirit in offering up new ways and means for their voices to be heard.”

The Australian reported that Mark had met with six conservative members of Parliament and believed that, while it wouldn’t be easy, their concerns about a constitutionally enshrined Voice to Parliament, as proposed in the Uluru Statement from the Heart, could be alleviated through the co-design process.

If the process results in legislation which details what the Voice to Parliament would look like, Mark said that regardless of what the government is saying now, this “would neither preclude, nor substitute for, constitutional amendment down the track”.

“The reality is that adjustments to government policy, in line with prevailing community sentiment, are a hallmark of a healthy democracy.

“Let me quote a pithy remark made by the former Prime Minister, Malcolm Turnbull, when he was explaining the government’s change of heart in establishing the Banking Royal Commission. He simply said ‘the government's policy remains the same until it's changed.'”

Delivering a vote of thanks to the panel, graduate lawyer Karri Walker said: "The Minister for Indigenous Australians and our other panellists have covered areas of deep interest to Arnold Bloch Leibler and to everyone in this room. ABL’s commitment to supporting Aboriginal and Torres Strait Islander Australians realise their aspirations – cultural, historical, economic – is part of our DNA."

To read the full article, which appears on page 6 of today’s Australian, click here.

Pictured below: graduate lawyer Karri Walker giving vote of thanks.

To view more photos from the event, click here.